Today, I’m talking with Azalea Dabill, author of the Chronicle series, a mixture of history, romance, and adventure. Azalea has released three books in rapid succession this year (2015); this series centers around a strong heroine, Kyrin, and takes the reader through medieval Britain and all the way to Araby. Every once in a while, you come across an author with a voice so distinctive, you could recognize it anywhere. Azalea Dabill has her own unique, lyrical style that draws you into the story and lets you experience it through all the senses. These books are appropriate for young adults and adults alike. Thanks, Azalea, for stopping by!

Azalea, please introduce yourself. I grew up in the California hills, building forts in the oaks. The fuzzy-sweet smell of acorns and moss, the perfume of purple lupines and golden poppies, the night-song of crickets will always stay with me. I was home-schooled and read The Young Trailers and fantasy adventure to my siblings. Now I enjoy growing things, old bookstores, and hiking the wild.

I’ve never found enough tales of adventure, romance, and mystery in the world, so I write crossover fantasy. Historical fantasy with medieval romance and a touch of mystery. In a word, adventure.

Question: What is Lance and Quill about?

A traitor lurks in the Oasis of Oaths…
And Alaina Ilen must grasp her destiny…
She escapes the Hand of Umar, forsaking rose perfume and her master’s court gardens for the safety of the desert. But the caliph’s reach is long.
A slave who runs must be caught. Will Alaina’s staff, her healer’s herbs, and her writing quill be enough against tribal rivalry, Umar’s vengeance, and unforeseen treachery?
The love of a prince of the sands, her teacher’s art of war, and the wisdom of one greater than her heart give Alaina the keys of choice. She must use them… or not.
So begins a war for freedom, justice, love…
Crossover: Find the Eternal, the Adventure

Question: Do you plan sequels to this book?

A prequel, Falcon Heart, has been published, and a sequel and fifteen companion stories are in the works. Path of the Warrior, the first companion Entry, is also out. It tells how Tae Chisun risks his life and his love for his people, and how he is thrown over the wall to the enemy and flees into exile, where his adventures will decide the course of many, of Kyrin Cieri and her stronghold in Britannia in particular.

Question: Is there a message in your novel/series you want your readers to consider?

The biggest challenge I face in our human experience is fear. I have found that my recurring theme is dealing with, and overcoming, fear.

Question: Why did you have to tell the story?

I ran out of the kind of books I like to read: fantasy, medieval mystery and romance. One day I was lamenting the dearth of good books, and decided I’d like to write some for other young people and the young at heart who are trying to find clean, adventurous reads. And the Creator brought it about.

Question: Who are your mentors?

My crit group has helped me “boots on the ground” the most. At the CCWC conference, Susan May Warren encouraged me enough that I didn’t give up writing. And Jeanette Windle once sat down with me and gave excellent pointers, while Kathi Macias gave me timely encouragement.

Question: Have you ever written a book in collaboration with another author?

My first collaboration will be an Anthology (tentative title) Path of the Warrior: Worlds Near and Far, to be created with my crit group and a few other author friends, scheduled for release in November/December 2015. The theme is any character on the warrior’s path: in physical, mental, or spiritual conflict, in the past, present, or future.

My writing schedule comes around my health and my day job. It varies so much you’d need a butterfly to catch up with me. I do try to work on something toward my writing every day except Sunday, whether it’s marketing, writing on my WIP, or revising. I find I generally end up revising at least five times. After the rough draft I go through it again, then send it to my crit group, revise according to advice, and let it sit while I work on something else. Then, though I am an editor, I send it to my editor, and Beta readers, and revise until I’m happy with it, then format, revise, and publish.

Question: What do you think makes a good story? What are the most important elements of good writing?

A good story needs a character whose skin you can get inside of (deep POV), with a sympathetic goal, and it usually resonates with me on a physical, mental, and spiritual level. I can feel, see, hear, taste, smell the land, the people, and the obstacles. The hurts, desires, and obsessions of the people in the story make sense, and relate logically among themselves and to their environment. And the sense of mystery, beauty, and wonder in life come across in the story. Plot and character layers add a lot. We writers need to take the time for detail, though you don’t want to get bogged down in them.

Question: Did your education help you become a writer or does it have any bearing at all?

Since I was homeschooled my education gave me time and opportunity to read, enjoy, and love good writing. Conversely, Literature class in college showed me what I never wanted to write: fatalistic, so-called realism. It was without hope. There was maybe one story in the entire 3 inch thick volume I considered passable. And I can’t remember what that was. So it can’t have been that memorable. 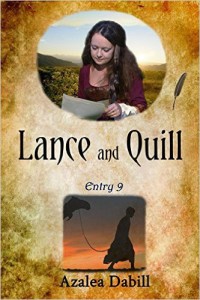 Question: What are some specific problems you’ve had with any of your novels?

Beginnings and endings challenge me. Beginnings because I have to get in so much back story to set the story scene to my satisfaction, without bogging it down. And the endings; getting the plot threads, themes, and ideas to come together in logic and beauty takes reworking, adding, moving about, cutting, setting aside, and coming back to it.

Question: Are they are unfamiliar words or concepts in this book that may be new to the readers?

Yes, quite a few, actually. Kyrin’s world spans medieval Britain, Arabia, and Korea, from stronghold peasants to lords, from desert Bedouin to the caliph’s court in Baghdad, and it touches the Hwarang, the flowering warriors of Korea. Some of their warriors’ exploits are unbelievable, except they’re historically documented.

The concept that early Tae Kwon Do might have spread from Korea, the Land of the Morning Calm, with an exiled warrior/leader, is new to history. Playing with what might have been is part of the fun of writing historical fantasy.

Question: Are there underrepresented groups or ideas featured in your book?

Muslims are often not underrepresented, but misrepresented. Most of what I’ve seen paints them as either murdering devils or people who could never kill anyone—Islam is a peace-loving culture.

What has been overlooked or hushed up is the fact that their religion inspires, encourages, and enforces violence against any and every unbeliever/infidel/ Nasrany. The more zealous for Islam, the more violent the person is. But Muslims are still people, people who need God’s love and forgiveness just as we do. They are human.

Though any human can turn into a monster if we insist on it. After all, hell is when God says at last, “All right, your will be done,” as C. S. Lewis mentions.

Question: What is the biggest thing that people THINK they know about your subject/genre that isn’t so?

People think (as I thought) that Saracen/Muslim swords in the Dark-Middle Ages were curved, that they were more or less scimitars. Research taught me that the curved blade came into use late in the Middle Ages; most swords were straight except for the slightest curve at the tip, such as all swords have. Which leads me to an excerpt. (See below.)

Zahir walked out to meet the Kathirib line, his head up, tail arched, hooves dancing. Faisal was one with his stallion. Slender and straight, all in black, with a pale kaffiyeh, he carried his sword at his side, his lance in hand, shield at his knee. . . .

He was in Kathirib bowshot. Where was that jackal-eaten parchment? Alaina’s fumbling fingers found it. She hoped none of the Kathirib contemplated treachery. Her throat was dry and she ached for her staff. She loosened her fingers so she would not break the white quill. . . .

A man in red and a black turban urged his horse from the bright line to meet her prince. Was it his darker colors that made his face paler than most of his men in white around him?

A camel length from Faisal, the Kathirib leader lifted his lance-tip. He made as if to ground the butt. Then tucked it under his arm and kicked his horse into a gallop.

The prince swung his shield around to deflect a blow, pulled his lance free, and whipped the shaft over Zahir’s head and up under another Kathirib’s sword-arm, flicking him from his saddle, an almond from its shell. Alaina’s mouth curved. A blow worthy of the best staff wielder.

A warrior in a corselet of silver under a streaming white kaffiyeh closed from the side at a gallop, lance raised.

“Faisal!” Alaina screamed, her hands as hot and damp as if she wielded her staff beside him. Faisal did not hear. He could not.

She could not guard his side. Alaina shut her mouth on a sob, fist pressed to her lips. Her blood thundered in her ears and her throat was raw, her body tense as gold wire drawn ready for the fire.