I can say I knew this author “back when,” and she never disappoints. And don’t miss the fun! Keep scrolling to join the blog tour and attend the launch party. 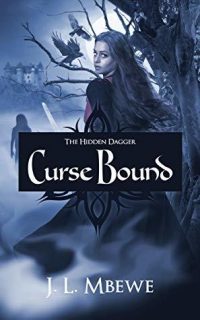 Kael’s worse fears have come true. Betrayal has shaken the Guardian Circle, the High Guardian is dead, and Ayianna and Prince Vian are in the hands of the Sorceress, but he and his companions must finish their quest, before they can attempt a rescue mission. Unfortunately, Desmond’s parting gift left them stranded on the western cliffs of Nälu.

Jathil, once heir to the throne of Arashel, believes her father will aid them, but first she must face the crimes of her past. When she does, she could never believe the outcome, nor the rippling effect it would have on the nations. Meanwhile the Alliance braces for war, but division threatens to undermine their efforts. When Nerissa returns from Ganya with the dragon regiment, she discovers a bigger problem. The curse bound are waking up.

As the quest nears completion, Kael is forced to choose between his heart and duty, and neither choice bodes well with him. Either way, he will face the Sorceress and her armies sooner or later. The battle for Nälu has begun and there can be only one victor.

REMEMBER: The best gift an author can receive is a review on Amazon and on Goodreads.

Back in 2003, I sat down to write an allegory to illustrate the challenge of overcoming the lies that bind us, but the story become so much more than just an allegory. It has taken on a life of its own.

Within the world of Nälu, you’ll see a reflection of our own world, yet there is something wild and fantastical and dangerous about it. Because it is a quest, we get to experience some of this.

From the cursed Forest of Inganno to the land beyond the Perimeter teetering on the edge of the Abyss where the harpy lord lives to the island of giants to the depths of the merfolk’s seas where mermen and merwomen raise and train dragons. Specifically in Curse Bound, we visit two special places. The Maze and the Blue-fire Sea Cave, which I share more about later on this blog tour.

The landscape, the creatures, and people groups inhabiting this wondrous world come together to create a unique setting for Ayianna and her companions as they acquire the ingredients they need to free her mother’s people from the curse.

Young Adult (and Middle Grade!) have been some of my favorite books to read and still are! I love the story of a young woman or man discovering who they are and their place in their world. The coming of age story, where characters don’t quite know what they want or they think they do, but soon realize how wrong they were!

For the past sixteen years, those are the kind of stories that come to me when I’m writing as well. I think because it has been deeply rooted in my own struggle for identity and coming of age. And what better way to reflect such a challenging journey than through epic fantasy?

Where can readers find your books?

Be sure to see the other books in the series:

With a curse, she will build an army. With the dagger, she will undo the last sacrifice. But first the sorceress must find the secret keeper.

Torn from her homeland and thrust into a betrothal against her wishes, Ayianna learns her family has a deadly secret that now has her on the run. She joins forces with Kael, an embittered half-elf, and Saeed, an elderly High Guardian, to seek answers to her father’s death, the destruction of Dagmar, and the plains people’s bizarre behavior.

Ayianna discovers there is more at stake here than just her mother’s disappearance and her familial duty to her betrothed. The sorceress has cursed the plains people, and it is a race against time to release them before the sorceress resurrects an ancient evil.

The Secret Keeper is on the run, but does she know the secret she keeps?

Ayianna is a cursed half-elf betrothed to Desmond, but her heart belongs to another. After discovering the cure for the Sorceress’s curse, she and her companions embark on a dangerous quest to retrieve the ingredients.

When dragons descend upon their party, Ayianna realizes the Sorceress is searching not just for the corrupted dagger, but a human sacrifice that will open a portal to the underworld. Battling deadly creatures and natural disasters, Ayianna is forced more and more to confront her insecurities and conflicted heart.

Now she must decide whether to be true to her family or true to herself. As the nations rally for war, betrayal threatens to destroy them all, and it’s a race against time to return before the curse devastates the plains people. 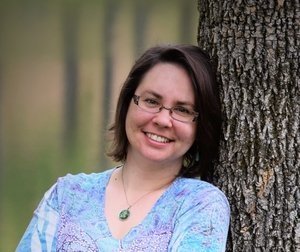 Writing as J. L. Mbewe, Jennette is an author, artist, mother, wife, but not always in that order. Born and raised in Minnesota, she now braves the heat of Texas, but pines for the Northern Lights and the lakes of home every autumn. She loves trying to capture the abstract and make it concrete.

She is currently living her second childhood with her wonderful husband and two precious children who don’t seem to mind her eclectic collections of rocks, shells, and swords, among other things.

Here, between reality and dreams, you will find her busily creating worlds inhabited by all sorts of fantasy creatures and characters, all questing about and discovering true love amid lots of peril.

Her debut novel, Secrets Kept, was nominated for the 2014 Clive Staples Award. Her second novel, Darkened Hope was a semi-finalist for the 2017 Alliance Award.

Find out more at http://www.jlmbewe.com/. 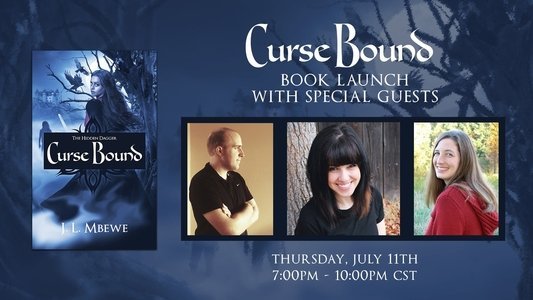 Curse Bound is coming soon! Join us as we celebrate its release on July 11th, 2019 at 7pm – 10pm CST. There will be plenty of bookish fun, games, and giveaways. AND we have special guests Kyle Robert Shultz, Lindsay A. Franklin, and Jenelle Leanne Schmidt who will be joining us and sharing about their books.