If you love fantastical stories set in exotic settings, then Azalea Dabill’s Falcon Chronicle series is for you. Falcon Heart is the first book in that series, and it is my feature for the week. 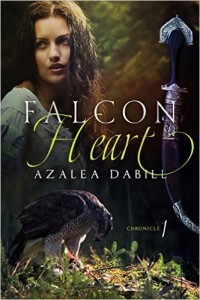 Slavers seize stronghold first daughter Kyrin Cieri from the coast of medieval Britain and sail for Araby. With a dagger from her murdered mother’s hand, an exiled warrior from the East, and a peasant girl, Kyrin finds mystery, martial skill, and friendship closer than blood.
The falcon dagger pursues her through tiger-haunted dreams, love, and war in the Araby sands.
Caught by the caliph’s court intrigue, Kyrin faces the sword that took her mother. She must find the heart of the falcon for the will to overcome, justice against hate, dagger against sword.

Kyrin Cieri was kidnapped from Britannia by Arabic slavers, and the tale of her rise in the Way of the Warrior in Araby was recorded by Alaina, a friend closer than blood and bone, when they foiled court intrigue in the house of Ali Ben Aidon.

Bent on escape, Kyrin finds herself forced to a mysterious quest. She will keep her oath and redeem Alaina and Tae, the exile who schooled them in the Way of the Warrior. But crossing oceans of sand and water to contend with treachery in Britannia is only the beginning.

Kyrin is caught in disguise between warring strongholds and, named witch by some, faces the awakening of her heart, a family who thought her dead, and the mystery of the falcon dagger.
The heart of the falcon bears the strength of sacrifice, the bravery of loyalty, and a love of truth. Will these be enough when Kyrin must choose to save her life, her heart, or her stronghold?

First daughter of Cierheld, she must find the key to the falcon blade and unmask a traitor before she fails her quest and her land, and brings death to all she loves. For Cierheld’s lost heir brings the doom of destruction or the breath of change.

Because there was so much well-written adventurous fiction in my library, but so much of it was immoral. I got tired of picking up a fantasy that started out great, then dived into painting pictures of sexual betrayal/immorality.

I decided I wanted to write adventurous fantasy for others like me who wanted all the adventure but not the detailed depictions of betrayals or even married intimacy. That beautiful relationship is meant to stay behind the door (unless you’re a Dr. or have another valid reason for discussing it with strangers) where we leave it with a nod, a knowing smile, and respect for a precious thing.

I enjoy most genres of fantasy immensely, except for horror, and it is important to read stories and adventures that show us how goodness overcomes evil in all its forms.

And yes, that includes intimate relationships, but you can get across that someone did sexual wrong, and suffered the consequences, without getting graphic. Fantasy wields the power to show us facets of strength, loyalty, honor, betrayal, evil, and goodness triumphant. Even in death, if necessary.

Other Books by Azalea Dabill 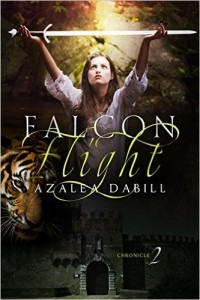 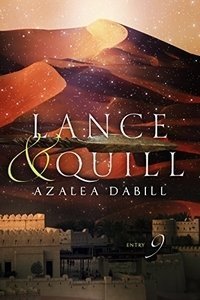 Where can readers find your book? 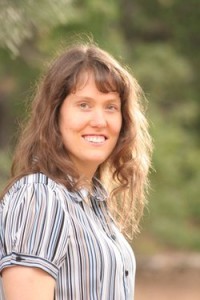 I pursue the adventure of the outdoors and far places that can only be reached by the heart. In all genres, fantasy with mythic themes are my reading and writing love. With a laugh and a smile, I keep the eternal in my mind’s eye. Beautiful Coeur d ‘alene, Idaho has been home to me this past year, while music takes me to far writing spaces: Eragon, The Mysterious Islands, 13th Warrior, King Raven, The Katurran Odyssey, and Music to inspire creativity Sa 03.

Epic fantasy takes me where I long to roam. Here are a few recent adventures: The Knight of Eldaran trilogy by Anna Thayer, J. L. Knight’s ILYON Chonicles, and currently Chris Walley’s The Lamb Among the Stars series, a great sci-fi fantasy.

Previous Post Retrieve, Book One of The Stormers Trilogy by Sarah Addison-Fox Next Post Launch by Jason C. Joyner