Make Your Mark Against Modern Slavery

Make Your Mark Against Modern Slavery

Abolition is a subject taught in every school in the United States; however, slavery still exists within our borders. By some estimates, there are currently 60,000 slaves(1) in the United States ranging from domestic workers to sex slaves. The 2014 Global Slavery Index (GSI) calculated that there were 35.8 million slaves of all ages world-wide (including those born into slavery).

UPDATE: According to the 2016 Global Slavery Index (GSI), the estimate it now 45.8 million slaves. This is a sad commentary on our evil world. 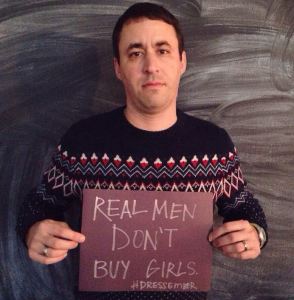 What Can One Person Do?

What can one person do against such an enormous, seemingly impossible problem? One person can only do a little to fight slavery, but what matters is that many people, working together, can make a large difference.

One of those people is my friend, Carly Lewis Bartee, who is participating in Dressember (Dress + December), to raise funds to support International Justice Mission. The Dressember Foundation, a 501(c)(3) organization, aims to raise awareness of slavery and sexual exploitation by encouraging its supporters to wear a dress every day in December, celebrating femininity and raising funds at the same time. Carly explains her part beautifully: “This is my small way to do what I can, where I can, with what I already have.”

We can’t solve a problem with silence and apathy. Things you can do:

Why Am I Discussing Slavery on my Author Website?

The most obvious reason for discussing slavery on my website is that I feel strongly about defeating the problem. I want to be an advocate for those who cannot help themselves. I plan to continue to post about this issue on occasion.

The most heart-breaking reason for discussing slavery here is that slavery directly impacts children. Human trafficking shatters children, denies them basic human dignity, and exploits them for gain.

Another reason to discuss slavery here is that it is part of my book’s plot. In fact, the epigraph of Mardan’s Mark (that little quote at the beginning of the book) is about slavery, and the reason I chose it is because it offers hope.

Even the captives of the mighty shall be taken,
and the prey of the tyrant be rescued,
for I will contend with those who contend with you,
and I will save your children.
—Isaiah 49:25

All of us, even those of us who live as free people in daily life (or maybe especially us), have fallen into spiritual slavery to Satan, trapped in sin’s bonds. Slavery is Satan’s primary tool.

God is completely invested in the salvation of mankind. We were hopeless, helpless, and doomed, and so God sent Christ to save us all from Satan’s toils. We can do no less for our fellow humans who are trapped in bondage, physical and spiritual.

Special thanks to Dustin and Carly Bartee for allowing me to use their photo.

Other Related Articles and Sites

Slavery Isn’t a Thing of the Past by Nicholas Kristof, New York Times

What is Modern Slavery? (U.S. Department of State)