Gillian Bronte Adams discusses her reasons for writing Orphan’s Song and her series, The Songkeeper Chronicles. 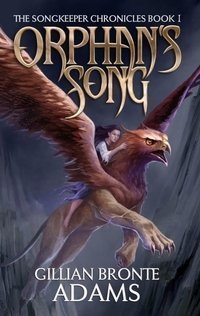 Her solo is a death sentence.

Deep within the world of Leira flows a melody that was sung at the beginning of time by Emhran, the Master Singer. Now it is broken, buried, forgotten. But in each generation, a Songkeeper arises to uphold the memory of the Song against those who want it silenced forever.

When Birdie first hears the Song coming from her own mouth, her world shatters. She is no longer simply an orphan but the last of a hunted people. Forced to flee for her life, she must decide whom to trust—a traveling peddler, a streetwise thief, or a mysterious creature who claims to know her past.

With enemies at her heels and war threatening to tear her homeland apart, Birdie soon discovers an overwhelming truth: the fate of Leira may hinge on one orphan’s Song.*

It started with just a tiny thread of an idea about a girl who could hear a song that no one else could. From there, I just started asking questions! What is this song? Why can only she hear it? What does the song do? Her name came after that: Birdie. And almost immediately afterward, Amos McElhenny stormed on scene, fully formed as a red haired peddler with a Scottish brogue and a blistering temper and a heart of gold. From there, the story just kept on growing. Talking animals, dwarves, a city with an underground cavern full of orphans left behind when their parents were taken away to slave camps, and the melody that brings them all together!

What is the main theme or lesson of your story?

One of the major themes running through Orphan’s Song (book one in the series) is the concept of identity and belonging. As an orphan, Birdie has always wanted a home and a sense of family, and that is consistently denied her. But the Song is always there. The Song whispers that she is not worthless, that she is beloved, that she belongs.

In years of working with youth and then participating in Bible studies with women my own age, a common struggle I’ve heard mentioned so many is this concept of identity and worth. We are really good at trying to find our worth in what other people think and our identity in what we do. Ultimately, that often leaves us feeling worthless and lost when we don’t have that approval or we don’t feel successful or victorious at what we are doing.

Our worth and identity instead must be rooted in the same thing, in the knowledge of who we are as beloved sons and daughters of God, bought with a price, and valued at the life of His own Son. I have to remind myself of that time and time again. And somehow, a tiny piece of that theme worked itself into my story.

The short answer is because I love it! I read so much growing up, and I know how much of an impact books have had and still have on my life!

The kinds of stories I love to tell just lend themselves toward a young adult audience, toward teens and early twenties who are exploring new things, learning how courageous they can be, and facing more difficult challenges with each passing year.

Where can readers find your book?

Other books in the series:

Gillian Bronte Adams is a sword-wielding, horse-riding, wander-loving fantasy author, rarely found without a coffee in hand and rumored to pack books before clothes when she hits the road. Working in youth ministry left her with a passion for journeying alongside children and teens. (It also enhanced her love of coffee.)

Now, she writes novels that follow outcast characters down broken roads, through epic battles, and onward to adventure. And at the end of a long day of typing, she can be found saddling her wild thing and riding off into the sunset, seeking adventures of her own (and more coffee).

Find out more about Gillian and her books at http://gillianbronteadams.com/.