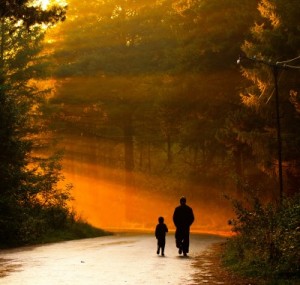 The first time I met my future (and current) husband, we were amazed by how parallel our lives had been up to that point in time. Both of our fathers had been in the Army when we were born; hence, we were both born outside of our home country (Texas), on foreign (Yankee) soil. Both of our families had moved several times during our childhood at almost the same times. Both of us had to switch to another high school because our father changed jobs. We actually attended several of the same events when we were in high school. We were both oldest children of oldest children (mothers and fathers), both of us had one sibling–a younger sister, both of us were in band and were members of the same kind of church, and, oh yes, both of us attended the same college.

The Hard Work of Being a Patriarch

Many of our decisions were influenced by our fathers, both of whom were born in October. At this writing, the patriarchs of our families are alive, healthy, and active. Thank you, God. And, since they’re celebrating birthdays this month, I thought it would be appropriate to say thanks to both of them for living up to the ideal of a patriarch. Neither father gets in our business, but somehow, they each stay in tune with the lives of their children and grandchildren. That takes tact! Yet, each in his own way, tries to support us through our triumphs and failures.

I know it’s not Father’s Day or even Grandfather’s Day, but here’s to you, Papaw and Papa Joe. Thank you for all you do and all you mean to us!

Update: It’s 2018 as I write this, and we won’t be seeing my father-in-law until after the trumpet sounds. We miss you, Terry, so much, and we can hardly wait to be reunited with you when we reach those gates.

Who are or were your mentors in life? Please leave a comment below.