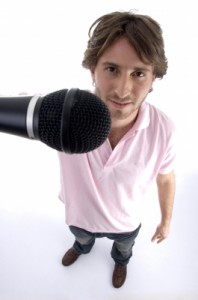 Photo by imagerymajestic via freedigitalphotos.net

I experienced stage fright tonight for the first time that I can remember. I guess I was lucky that way. Here’s the story and what I learned about writing from bombing a choir try-out.

Our new worship minister decided to have solo “try-outs” for our praise team. Not that we’d get kicked off the team if we did poorly (thank God), but Josh is sorta’ new and wanted to put us through our paces. At least, I’ll give him the benefit of the “new” moniker for three more months. After that, Josh, the shiny newness will all have rubbed off.

So, back to the try-out. I never would have predicted having stage fright. Not after years of public speaking in front of the toughest audiences in the world for seven hours a day as a middle school teacher. Middle school is no place for sissies. Tonight, however, I was consumed by stage fright.  You see, there’s this little issue of breath control. In order to sing well, you must have breath control, but if you’re shaking like a leaf and can’t get enough air into your lungs, breath control is not going to happen. Also, a fog descended over my brain so I actually forgot the words to my song. What? How could this happen to me? But, I think I figured something out by watching the rest of the praise team members.

Some people think the way to overcome stage fright is to avoid the stage. Huh uh. I contend that the difference is practicing in public. Twenty-five people showed up to this try-out session, and the difference–THE difference–in those who did well and those who scraped by was the level of solo performance experience. I have always done my singing in groups. I’ve even performed duets on stage, but this was my first time singing a solo on stage. I’d never performed a vocal solo, and therein lies the key. You have to practice performing solo in front of others in order to work through the fear.

How Does Singing a Solo Relate to Writing?

People who say they are fiction writers are people who plan to perform in public. I’ve said this before, but a fiction writer is in the entertainment business. Sometimes, a writer practices in private for years before he shares his writing with others. What good is it to practice alone? The fastest path to a great public performance is available to the writer who practices in public by sharing short stories, blogging, seeking critiques of work in progress, etc. Working through the fear by practicing and performing in public, getting the feedback of an audience, is the best way for a “good” writer to reach her full potential.

Jeff Goins (@JeffGoins) wrote a book called You Are a Writer (So Start Acting Like One) in which he says, “…you need to demonstrate competence. This means showing us what you have. It means practicing in public.” He compares musicians, writers, and artists. A singer has gigs, an artist does shows, and a writer puts his or her work out where people can read it. I recommend his book.

Avoidance of the stage isn’t the solution to stage fright; performance is. Do you remember the scene in Harry Potter where Harry performs the powerful and difficult Patronus spell to save himself and his godfather from the dementors? Afterward,  Harry explained his ability to perform the spell this way: “I knew I could do it this time…because I’d already done it.” However good or bad the first performance is, the experience is valuable. Priceless, in fact. Repeated performance to gain experience is the key to becoming a great entertainer, whether you are a singer or a writer.

So, put it out there, my friend. Perform. Reflect. Repeat.

Where do you perform your art? Please leave your comments below.