Released on August 28, 2018, Spice Bringer is a fantasy by H.L. Burke, AKA “The Dragon Master”. Not really, but I love her Instagram photos @burkesdragons which feature her dragon doing crazy stuff. 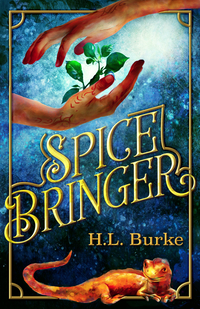 A deadly disease. A vanishing remedy. A breathless journey.

“All her life, Niya’s known she will die young from the fatal rasp. She survives only with the aid of vitrisar spice and a magical, curmudgeonly fire salamander named Alk. Then an ambitious princess burns down the vitrisar grove in an effort to steal Alk so she can claim her rightful throne. Joined by Jayesh, a disgraced monk, Niya and Alk must flee to the faraway Hidden Temple with the last vitrisar plant, or all who suffer from the rasp will perish.

“But even as Niya’s frustration and banter with Jayesh deepen to affection, the rasp is stealing away her breath and life.

“For a girl with limited time and a crippling quest, love may be more painful than death.”

How did you get the idea for your book (the story behind the story)?

I watch a lot of Youtube interesting fact videos, and I came across one about the origins of salt and pepper as the most common seasonings in western cuisine. Part of the story was how, in order to make their product seem more alluring, merchants would claim that pepper was harvested from groves guarded by fiery serpents … it kind of got out of hand from there, though.

I don’t usually go into a book with a lesson to teach and theme comes out very organically, but I think with Spice Bringer it’s about the preciousness of life, the importance of hope, and holding on to what makes life valuable even if in some ways that hurts more than giving up would.

Does your story have a unique setting (time and/or place)?

The Empire of the Golden Bird is based loosely on ancient India. It has a lot of made up elements that you wouldn’t have found in the real version of ancient India, of course, but since the story was inspired from tales out of the spice trade, it made sense to put my world in a rich, tropical world filled with jungles and color.

Almost accidentally. I like themes of first love, of exploration, of discovering your place in this world. Those fit very well in the YA category, whereas fiction for adults can be a little more jaded then I’m capable of being. Even when I try to write for older audiences, I tend to get labeled “YA” just because I have a certain playfulness that I can’t seem to turn off.

I have the world’s best cat. His name is Bruce Wayne, which makes him BAT CAT. He’s a seventeen pound orange tabby with the best personality, and I adore him. When my kids are sick, he’ll sit with them. Unless you have allergies—in which case, my condolences—you should get a cat. Cats make life better.

Where can readers find your books? 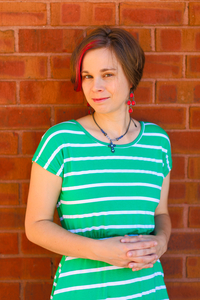 Born in a small town in north central Oregon, H. L. Burke spent most of her childhood around trees and farm animals and was always accompanied by a book. Growing up with epic heroes from Middle Earth and Narnia keeping her company, she also became an incurable romantic.

An addictive personality, she jumped from one fandom to another, being at times completely obsessed with various books, movies, or television series (Lord of the Rings, Star Wars, and Star Trek all took their turns), but she has grown to be what she considers a well-rounded connoisseur of geek culture.

Married to her high school crush who is now a US Marine, she has moved multiple times in her adult life but believes that home is wherever her husband, two daughters, and pets are.

Find out more about her at www.hlburkeauthor.com.

Previous Post Sword of Decision by Anne H. Campbell Next Post Retrieve, Book One of The Stormers Trilogy by Sarah Addison-Fox