Today, I’m talking with Terri Luckey, author of the Young Adult fantasy series entitled Kayndo. Her books have lots of great action, loads of imagination, and wolves. What could be better than that? She just released the second book in the series, and we talk about it below. Thanks, Terri, for stopping by! If you would like a free copy of Ring of Despair, there’s a giveaway on Goodreads!
Goodreads #Giveaway for Kayndo, Ring of Despair. Powered By the Tweet This Plugin 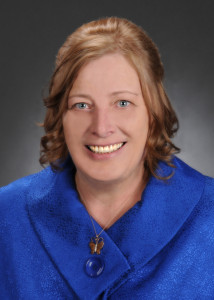 Terri, please introduce yourself. I currently reside in Redfield, Arkansas with my husband and Border collie, Jazzy. I’ve lived in several other states including Iowa, Kansas, Illinois, Texas, Florida, and Arizona. My writing background is in Journalism and my experience includes working as a Reporter, News Editor, Managing Editor, Continuity Director, Advertising Script Writer, and now an Author. I let my research experience combine with my imagination to paint a fantasy world I hope you enjoy visiting. Connect with Terri at http://www.terriluckey.com.Question: What makes your book different from others in your genre?

The Kayndo series is very different from most in the fantasy genre. There are elements that place it in both the post apocalyptic and dystopian categories, but unlike most these aren’t dark. I combined both fantasy and non-fiction elements to create a people and world that I want readers to enjoy spending time with, and hate leaving. I did a lot of research on survival, edible plants, weapons, and wildlife behaviors and incorporated those into these books to give this world a realistic feel not often found in fantasy. Then I gave my characters obstacles that seem impossible to surmount to test their loyalties and friendships. Readers tell me they think about the books long after they put them down, and they will love the characters for life. I can’t think of any greater praise than to tell an author their story is unforgettable.

Question: How did you name your characters?

I wanted to give my story an authentic feel that would fit a tribal culture so I did research on tribal names. Many had either a similar suffix or prefix to differentiate whether a name was masculine or feminine. I did the same. Masculine names end in e or o. Feminine names end in a or i. I asked my beta readers what they thought about the names since I was worried they’d be too confusing. They replied that although in the beginning the names can be confusing, it didn’t take them long to sort them out. They said the names fit the tribal story, and I shouldn’t change it.

Question: What inspires you?

I believe God does. I sure can’t take the credit since I often dream the stories I write. This one started with some questions and a dream. Didn’t God appoint us caretakers of his creation? Is He disgusted with how we’re treating it? Then I dreamed about a destroyed world that God (Kun) took steps to fix, and a boy who needed a wolf companion, but didn’t exactly get his wish. Kayndo series is fantasy with some Christian Themes.

Dayvee’s hands shook. All his senses cried out to flee. He struggled to keep his legs moving toward the mountain lion.

The beast snarled. A ripple moving through the predator’s taut body exposed the menace. Its muscles flexed, and then bunched, ready to unleash and spring.

I’m going to die. Dayvee’s knees weakened and his legs trembled. His mouth went dry. Terror hammered his galloping heart into his chest. He snapped his arm forward—the torch flew through the air and landed in front of the lion. The beast jumped to one side. Dayvee pitched the other. The fiery stick plopped onto the lion’s back but tumbled off.

“Go!” Dayvee screamed. Loading his hands with the rough rocks, he flung them. They pummeled the lion.

The beast shook its head, backed a few steps, then displayed its teeth and hissed again.

Dayvee desperately hurled more stones. One crashed into the lion’s face. The predator turned, moved a couple steps in retreat, then stopped. Dayvee strained and heaved his last rock using every bit of his strength. A dull thud filled the air as the stone hit the animal’s flank. The lion fled.

Dayvee stood rooted to the spot for a second surveying the woods. Did he dare believe he’d driven the mountain lion away? 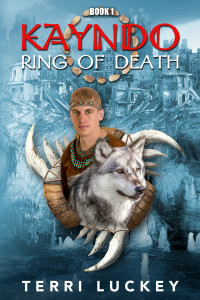 After wars burned their world, sixteen-year-old Dayvee has only his knife and chakram to survive the clan’s training, the wilderness, and threats like mountain lions…but his malicious training leader, Nero is out for blood. His hatred will test Dayvee’s resolve, courage, and friendships. But even deeper trouble than Nero brews in the kingdom of Taluma and a Kayndo–an animal master–may need to rise to defeat it.

In paperback or Kindle at Amazon. Kindle is now on 99¢

At Smashwords and Barnes and Noble Nook. 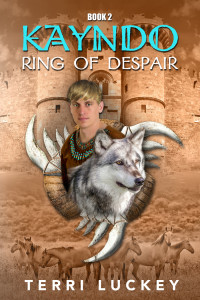 In book two Dayvee must prove himself a leader and protect the Vita from threats, but some plan to kill him before he can. He’ll need to journey to Taluma’s capital to turn the wolf companion he loves over to the prince. Despair looms, but he has a duty to fulfill. Prince Tibalt prepares for an invasion to Taluma, but assassins may lurk in the shadows. There are those who would help him, but can he trust them? The adventure continues in Kayndo Ring of Despair…

In paperback or Kindle at Amazon.

At Smashwords and Barnes and Noble Nook.