The Making of Vanquished

Today, I’m pleased to interview Katie Clark, author of the Enslaved Series. This dystopian trilogy is exciting and thoughtful at the same time. I highly recommend Katie’s books. Hi Kathrese! Thank you for having me today. People are always asking me how I got the idea for Vanquished, my debut novel. It’s a story I love sharing, and I’m thrilled you’ve invited me to tell it!

This wasn’t an easy idea. It came to me in bits and pieces over the course of a few years. It started with the main character, Hana. I was always thinking about this girl. This strong but vulnerable girl. She wanted to believe in the life she’d been led to live. She wanted to follow the rules. Except she couldn’t.

At that time, I had no idea what brought about her unhappiness or dissatisfaction, I only knew she needed to work toward something more.

Fast forward a year or two, I was given the idea to write a story set in a world where there was no God. No Bible. No religion. Would this world be better? Worse? And how? I had no idea how to make this story happen, but the idea stuck in my head and percolated. 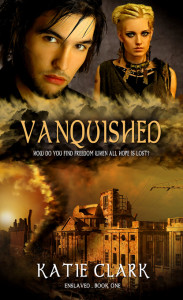 Finally, the two halves came together to make a whole. One day I was sitting in church (yes, I admit I was daydreaming), and it hit me. These two stories were the same story. Hana was dissatisfied because she suspected there was more than met the eye in her city, and she set out to find it. Her mom was sick, and she needed answers. What she uncovered went way beyond hidden medications and technology—what she found was the truth that the God she’d been told was myth might not be myth at all. The story just flew from there, and it didn’t end for three books!

Deliverance and Redeemer, books 2 & 3, came mostly in dreams. Sounds crazy, I know, but I’d wake up and start writing as fast as I could before I forgot what I’d just “seen” in my dreams.

Another question I’m asked all the time is, “What are you working on now?”

Well, now that the Enslaved Series is out in the world, I’m working on a new series. It’s called the Beguiled Series, and it’s a YA supernatural series. You can see the book trailer for book 1, Shadowed Eden, here (and there’s also an offer for a free copy of Vanquished in the description of the video!) 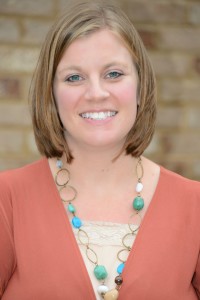 When Hana’s mom is diagnosed with the mutation, she is denied the medication that might save her life. Fischer, a medic at the hospital, implies there are people who can help—except Hana’s not sure she can trust him; Fischer is involved in a religious group, and religion has been outlawed for the last hundred years. Hana embarks on a dangerous journey, seeking the answers Fischer insists are available. When the truth is uncovered does Hana stick to what she knows? Or does she join the rebellion, taking a stand against an untrustworthy society?

KATIE CLARK writes young adult speculative fiction, including her dystopian Enslaved Series, made up of Vanquished, Deliverance, and Redeemer. The books released in paperback in September, and were released as ebooks on November 22, 2014. You can connect with Katie at her website, on Facebook, or on Twitter.

Previous Post Marst: Land of the Twin Kingdoms Next Post The Map, A Window into a Fantasy World