The Story Behind Healer’s Curse

My readers are looking forward to Mardan’s Anointed, Book Two of the Mardan’s Mark series, but I wrote a novella first.

So why did I do it? Why postpone progress on Mardan’s Anointed to write a novella?

Simple. Healer’s Curse is a companion work to the first book that needed to be published before Book Two. That’s the smart-alecky answer. But it started with deleted content.

Kaeson, for newbies, is the capital city of Northern Marst, home to Princess Srilani and her siblings. It’s also the base of operations for the remainder of the series. Many critical events occur in Kaeson, so I wanted to give readers a good look at the city and its people while exploring Lady Elilan’s coming-of-age story.

A secondary reason for putting Mardan’s Anointed on hold for a few months was because I had some characters who needed more work, primarily Lady Elilan and Raymon. These two will continue to be important during the rest of the series, and they weren’t ready to take the stage. 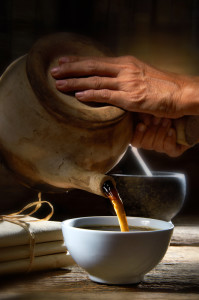 Lady Elilan is a good friend to Princess Srilani and Princess Renélan. She’s the great-granddaughter of Srilani’s teacher and king’s counselor, Judge Elison. Her story gave me a good way to figure some things out that weren’t going well in the next big installment of the series.

Elilan has the gift of healing. But she’s afraid to use it because of tragedies in her past. Instead of using her gift, she’s decided to use natural means to help her patients. I guess you could call her an herbalist. Teas, ointments, salves, and tinctures are her tools in trade. She’s very good at what she does; however, she cannot ignore her gift forever.

I’m trying to avoid caffeine whenever possible, and I love to drink herbal tea while I work. My favorites are: Mint, and Orange and Spice. In honor of Lady Elilan, my question for you is: What’s your favorite herbal tea?