When the Fans Take Over 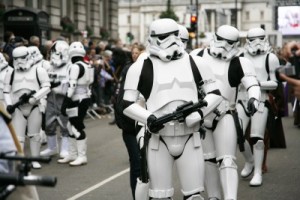 When the fans take over, what’s an artist supposed to do? George Lucas could be asking himself that question as J.J. Abrams takes over the director’s chair for the seventh Star Wars movie.  J.J. was even younger than I was when he saw the first Star Wars movie, and he says, “‘To be a part of the next chapter of the Star Wars saga, to collaborate with Kathy Kennedy and this remarkable group of people, is an absolute honor. I may be even more grateful to George Lucas now than I was as a kid.'”1

Lucas chose to sell LucasFilm, Ltd. to Disney back in December 2012, and in case you’re thinking it was for the money, the answer is “yes” and “no.” Yes, he sold the company and its assets for $4B, but no, most of the money isn’t for him. George is donating the majority of the proceeds to fund education initiatives.

Back in the first days, of course, Star Wars was George’s brainchild, but as with most movie projects, the story and the product never truly belonged to one person. Over the years, Lucas had many collaborators, and it makes sense that after 41 years, Lucas would prefer to leave the helm of his company and turn it over to a new generation. (No Star Trek jokes were intended.)

That’s great for a movie-maker, you’re thinking, but what does this have to do with authors? Plenty, I think. Okay, maybe you have to be published and have actual product sales before this is an issue, but stay with me here.

Let’s assume that several of your novels have been published. If you’re getting older–you are–then, how do you plan to turn over your assets to the next generation? Granted, copyright is not forever, but still, it outlives the author by quite a number of years.

In addition to turning your body of work over to an heir, there’s the issue of how to preserve or curate the work. Especially with the rise of ebooks, this issue has to be thought out. The owner must take deliberate steps to preserve his or her work in both electronic and non-electronic forms in perpetuity. An ebook seems so ephemeral, and yet, we’re producing them by the thousands.

And what if you’re blessed/cursed with fans who spin tales about your characters and the universe you’ve created? What then? What happens when the fans take over?

I would love to hear your thoughts on this topic. Please leave your comments below.

Creating a Legacy and the Echoes of Yesterday