William Bradshaw, King of the Goblins by Arthur Daigle

Meet Arthur Daigle, author of a series of Young Adult (YA) novels. Today, we are discussing William Bradshaw, King of the Goblins, and it sounds perfect for anyone who needs a dose of humor with their fantasy. 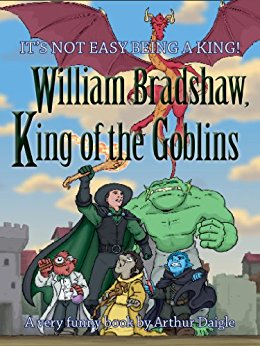 There’s a new King in Town! That’s the good news. The bad news is that Will Bradshaw has problems. He’s new on the job but he’s already made enemies with a fire-breathing dragon. His friends are not much better: goblins whose favorite pastime is messing things up, trolls with anger management issues, an over-achieving fire scepter, and an un-cooportative magic mirror. Aside from all that, all he has to worry about is a war. And that’s the trouble. Throughout recorded history the goblins have never won a battle, much less a war. But things are going to be different this time around. William Bradshaw is determined to win, using every means at his disposal, including stealth, subterfuge and exploding outhouses.

A big inspiration was how I saw people make decisions. Too often people do what others wanted them to do rather than do the right thing. I based my villain, Kervol Ket, off that perception. He’s doing what the rules say, no matter how disastrous that is for his enemies, his followers or himself.

Everyone ends up at the bottom of the heap at some point, often because of no fault of their own. You may be low, but nothing says you have to stay there.

The William Bradshaw series is set in the Kingdom of the Goblins. It’s a former strip mine, still recovering after being abandoned for decades. There is literally nothing there worth having, which is why the goblins are allowed to keep it. This doesn’t bother them at all. They’re perfectly happy living amid ruins, old mine shafts and slowly healing landscapes.

I was inspired by a line from the original Clash of the Titans. One character is a former playwright, who says he used to write tragedies until he learned that the world has enough of them. I took those words to heart. There’s enough suffering in the world. I’d rather make people laugh.

I’ve found that an essential part of writing is taking long walks alone. Odd, I know, but it works. The time alone gives your mind the opportunity to wander, and doing this helps me develop more than half my story ideas.

Arthur Daigle was born and raised in the suburbs of Chicago, Illinois. He received a degree in biology from the University of Illinois Urbana-Champaign, which sounded like a good idea at the time. This led to work as a zoo intern at Brookfield Zoo, an assistant fisheries biologist at the Max McGraw Wildlife Foundation, and a research assistant at Morton Arboretum. Most recently he’s been employed grading high school essay tests and garden associate (yeah, the job market is that bad). In addition to writing, Arthur is an avid gardener and amateur artist.

Arthur is the author (no jokes, please, he’s heard them all) of five books. These include William Bradshaw King of the Goblins, William Bradshaw and a Faint Hope, William Bradshaw and War Unending, William Bradshaw and Fool’s Gold and Goblin Stories. These books were almost inevitable given that the author has been a fan of science fiction and fantasy since he was old enough to walk. Major influences include the works of the puppeteer and filmmaker Jim Henson and the British artist Brian Froud. Expect more books in the Will Bradshaw series, as all attempts to stop Arthur from writing have failed.

Find out more about Arthur on his Amazon Central page.

Previous Post Explore Leira Blog Tour: M is for Melodies Next Post From the Stories of Old: A Collection of Fairy Tale Retellings with Corinne Morier